Prees Heath was formed as the glaciers retreated at the end of the last ice age, several thousand years ago. The earliest known record of human habitation is an exhibit now in the Ludlow Museum Resource Centre – fragments of a Bronze Age cinerary urn and its contents, dating from around 3,500 years ago. It was found in 1916 by an individual serving with the Royal Army Medical Corps.

In the 1914 – 1918 war Prees Heath Common provided accommodation for around 25,000 men who were trained in trench warfare before being sent to the frontlines – many would not have returned home. The common was covered in wooden huts constructed on site, some of which were used locally after the war as sheds, workshops and even homes.

Many regiments were stationed here, including the Highland Light Infantry. The camp had electricity before the nearby town of Whitchurch, and there were a number of shops on the site as well as a cinema. There was also a military hospital on the common with over 600 beds. Soldiers used to write home on postcards as they were cheaper to send than a letter, and many of these postcards now provide photographic evidence of what the camp was like.

Among the men stationed here was one Norval Sinclair Marley. Little is known about his life save that many years later, in 1945 when he lived in Jamaica and he was around 65 years of age, he fathered a child who went on to become the international reggae star Bob Marley. Bob never got to know his father properly, who separated from his mother when he was young and died when he was about 10 years of age.

After the war the camp was used as a demobilisation centre, with thousands of soldiers passing through as they were cleared to return to civilian life. Thereafter the common was restored to heathland and all structures were removed.

To watch a six minute video produced by Media Active about the WW1 training camp on Prees Heath Common to mark the centenary of World War One click here.

In 1940 the common was used as an internment camp for so-called enemy aliens. These were mainly people of Austrian or German origin, many of whom had come to this country as refugees to escape the Nazi regime. With the war progressing badly at first, the government decided to intern thousands of such people, with the Prees Heath camp containing just over one thousand. The camp was a series of tents surrounded by barbed wire fencing, with internees categorised according to their perceived threat and consequently allowed more or less freedom. The diet was mainly salted herrings and sanitation was basic.

Among those interned here were Norbert Brainin and Hans Schidlof, who met here for the first time and who later formed the Amadeus Quartet, a leading string quartet in the postwar years, and E F Schumacher, economist and author of the influential book ‘Small is Beautiful’.

The internment camp was closed in the autumn of 1940, with those internees who had not been released shipped to the Isle of Man. The tented camp then provided accommodation for Italian prisoners-of-war. Some of these prisoners would have worked on local farms. The camp was then closed for the construction of the airfield.

In 1942 a bomber training airfield was constructed by McAlpines on the common and surrounding farmland, with all the land being flattened and drains installed. It was initially known as RAF Whitchurch Heath, but its name was changed to RAF Tilstock to avoid confusion with an RAF Whitchurch in southern England after a number of planes had been flown to that airfield in error. A satellite airfield was built at Sleap, near Wem, and this is now the base for the Shropshire Aero Club.

There were three runways, a grassy strip alongside one of which across the A41 is still used today by a skydiving company. The main runway, which runs through the middle of the reserve, was over a mile long and 50 yards wide and crossed the A41 road, which was closed for the duration of the war. The chief bomber airplane used in the training of the pilots and aircrew was the Whitley, known as the ‘Flying Coffin’ on account of its shape. Stirlings, Ansons, Oxfords, Wellingtons and Halifaxes were also based here, as well as Hurricanes and a Spitfire for fighter affiliation duties. In April 1945 it was recorded that 187 officers and 1,695 other ranks had been based at the airfield.

As it was a training airfield, no bombing raids over Germany took place from here. However flights were carried out over France to drop hundreds of thousands of propaganda leaflets, termed Nickel raids. Stirlings were also used to tow Horsa gliders which featured in transporting troops in the Arnhem operation and the D-Day landings.

The airfield saw a number of accidents, including one occasion when a Stirling ended up on the A49 – one account says it overshot the short runway, whilst another says the plane was caught by the wind whilst taxiing on the perimeter road. There may of course have been more than one similar incident.

35 airmen were killed as a result of flying accidents, some of which may have been connected to the fact that many of the airplanes were quite old, having been retired from operational duties as being ‘war-weary’. Many of the accidents occurred in night-time flying exercises. This included Pilot Officer D.P.R. Wild, who was flying a Whitley when a con-rod in the starboard engine seized. He instructed other crew members to bale out, and left his position to move to the escape hatch himself, but in doing so his parachute opened, which prevented him from jumping safely. Untangling himself he returned to the cockpit hoping to control the Whitley enough to crash land. Although he reached the airfield, he lost control at the last moment, the plane crashed alongside the runway and he was killed in the ensuing fire.  In January 1943 a Whitley crashed on a training flight in Denbighshire, killing all eight crew – the cause of the crash has remained unexplained. April 1943 saw six crashes, with a total of eleven aircrew losing their lives and many others suffering severe injuries. On at least one occasion a Stirling on a training flight was attacked, hit and caused to crash by a German Ju88 aircraft.

A number of personnel from the Women’s Auxiliary Air Force were based at the airfield, some of whom had driving duties such as leading visiting aircraft to dispersal points with ‘Stop – Follow Me’ displayed on their vans, or driving ambulances. One of them, Peggy Drummond-Hay, wrote a book about her experiences called ‘The Driving Force’. In it she recalls a white bull terrier called Sinbad belonging to an officer who was killed – he used to be seen queuing for and then getting on the bus back to the airfield from Whitchurch  in the evenings, always occupying a seat, and refusing to be moved.

This airfield’s control tower still stands on the reserve, a solid construction built to be bombproof. After the war ended in 1945 the common was not restored to heathland.

The Social and Cultural History of the Common

As registered common land, there are nine households around the common which have commoners’ rights attached to their title deeds, and these rights exist in perpetuity. The rights include rights to turn out grazing animals, rights to dig turf and sand and to collect brushwood.

The common has long been a public access site, and it is now designated as Open Access land under legislation. This means that people can walk wherever they wish on the common. It also means that dogs have to be kept on short leads between 1st March and 31st July to protect ground-nesting birds.

For many years people use to come here from the West Midlands area for a day out and a picnic. The common was also used as a nine hole golf course and a horse training gallop. An open air swimming pool was located on near the A41/A49 junction. There was an abundance of wildlife, with hundreds of skylarks breeding and Silver-studded Blue butterflies being seen all over the common.

After 1945 the main airfield runway was left in place and many local people learnt to drive here. In the 1970s the runway was hacked up and most of the concrete was removed, allowing the dormant heathland seeds to germinate. Around this time much of the rest of the common was let as agricultural tenancies and the heathland was ploughed up and used to grow crops. To feed the nutrient-poor, hungry land thousands of tonnes of manures, including chicken manure, and fertilisers were applied, thereby destroying the heathland habitat.

In the 1990s then owners submitted a planning application to extract millions of tonnes of sand and gravel from the common. This galvanised the commoners, local residents, Shropshire and Cheshire Wildlife Trusts and Butterfly Conservation to form the ‘Save Prees Heath Common Campaign Group’ to oppose the application, which was duly rejected.

1. The areas of remant heathland, including the runway, were designated as a Site of Special Scientific Interest by English Nature (now Natural England) in 1991.
2. Local author Eleanor Cooke wrote and had published a book entitled ‘Who Killed Prees Heath?’, a poetic evocation of the common, its history, landscape and people. The book was featured on the BBC Radio 4 programme ‘Kaleidoscope’.
3. Dr Jenny Joy carried out an ecological survey of the Silver-studded Blue butterflies on the common on behalf of Butterfly Conservation.
It was recognised that the only way to protect the common and the Silver-studded Blue colony was through purchase, and, after many ups and downs, Butterfly Conservation finally purchased the western half of the common on 30th May 2006, with much financial help from public donations and a grant from GrantScape. 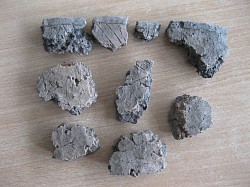 Painting of Prees Heath around 1900 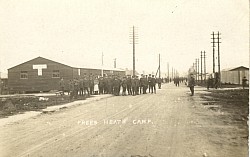 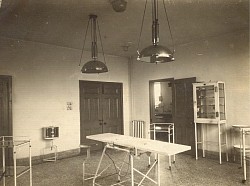 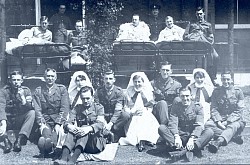 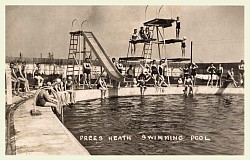 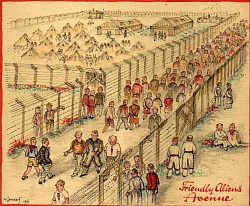 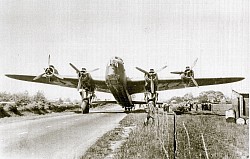 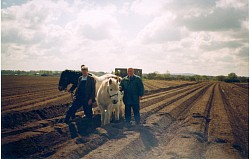 The heathland turned into potato fields postwar, prior to purchase by Butterfly Conservation, with the commoners unable to exercise their grazing rights
Made with SimDif 2